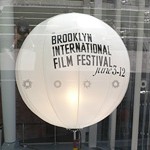 “The Big Race” screened at the Brooklyn International Film Festival. In Madagascar, one of the world’s poorest countries, nearly half of the population is under the age of 14. Very few people have access to electricity, plumbing, or many of the other conveniences we take for granted in the first world. What do two small boys in this nation of children do with a free day? Tulch and Noel, best friends with a day off from school, successfully illustrate that you don’t need fancy toys or the latest technology to have some fun on a beautiful summer afternoon. Maybe all you need is a tin can and a little imagination… The Big Race is a 5 minute documentary filmed in Antsirabe, Madagascar. WINNER: Viewer’s Voice Award Cinequest 2005, Official Selection Malmo Internation Children’s Film Festival 2005, Official Selection Durango Film Festival 2005.